Tamaz Somkhishvili, a Russian and Georgian businessman, is known in the criminal world as Tamaz Tobolsky (Tamaz from Tobolsk). In Ukraine, he is known as the organizer of the scheme, under which his company Kyiv Terminal is trying to claim $100 million from the Kyiv budget.

Tamaz Somkhishvili was first associated with one of the top thieves in the criminal underworld - Ded Khasan (Grandpa Khasan), and after his death - with his heir, Shakro Molodoy (Shakro the Young). It is his interests in Georgia and Ukraine that are represented by Somkhishvili.

Tamaz Somkhishvili became known in Georgia as a member of the West Siberian criminal group. He got his nickname because of the city of Tobolsk, where he lived. After moving to another city – Kogalym – he became the right hand of the thief-in-law Bogomol, aka Gennady Bogomolov. This allowed him to advance considerably in the hierarchy of the Russian underworld, since Bogomolov, an influential figure in the Russian world of thieves, was one of the pioneers of thieves’ penetration into the Russian oil business.

Without any engineering or managerial education or any experience in oil production, Tamaz Somkhishvili, a teacher by profession, first controlled the Kogalymneftegaz oil company, which later transformed into Lukoil. Then he himself became General Director of Lukoil, Lukoil Markets and Rosnefteexport. Together with the main shareholders of Lukoil (oligarchs Vagit Alekperov and Leonid Fedun) he became the founder of the elite Lukoil tennis club.

In 2005, Spain’s special services detained Shakro Molodoy. For money laundering, the court sent him to prison for 7.5 years. At that time, Tamaz Somkhishvili was running the chief's entire business.

In Georgia, Tamaz Tobolsky founded the TS Holding business group, which included dozens of companies. Experts estimate his fortune, according to various sources, at $335-700 million, making him one of the richest men in the country. In Georgia, he is known as the owner of one of the most luxurious palaces in Tbilisi. Initially, the media attributed a three-storey, 8,000-square-meter mansion to Shakro Molodoy, but it later turned out that it belonged to his associate Somkhishvili.

Tamaz Somkhishvili is known as a participant in the scam of the time of Mayor Chernovetsky. In 2007, Somkhishvili’s Kyiv Terminal won the tender for reconstruction of Kharkiv Square. No one began construction work, and in 2013, the investment agreement was terminated. Kyiv Terminal filed a lawsuit against the Kyiv City Administration with the demand to compensate UAH 671 million of losses. Although the claim looked ridiculous, but the Economic Court of Kyiv decided that the losses should be covered by the Kyiv Administration. The city won the appeal, but the Supreme Court sent the case back on appeal. Interestingly, Somkhishvili suggested that the Cabinet and the President ‘solve the case peacefully’. In his letters, he presented himself as a kind of ‘British investor’.

Viktor Gleba, the former Deputy Chief Architect of the capital, directly called this situation a scam by Chernovetsky and Georgian thieves-in-law. After all, Tamaz Somkhishvili’s company never provided any evidence of their losses. 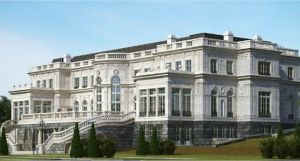 Tamaz Somkhishvili was born in Georgia on June 22, 1957. He studied at Tobolsk and Tyumen State Universities, and later – at the National Academy of Economics and Public Administration under the President of the Russian Federation.

He likes shooting. He was elected President of the Georgia Shooting Federation in 2017.